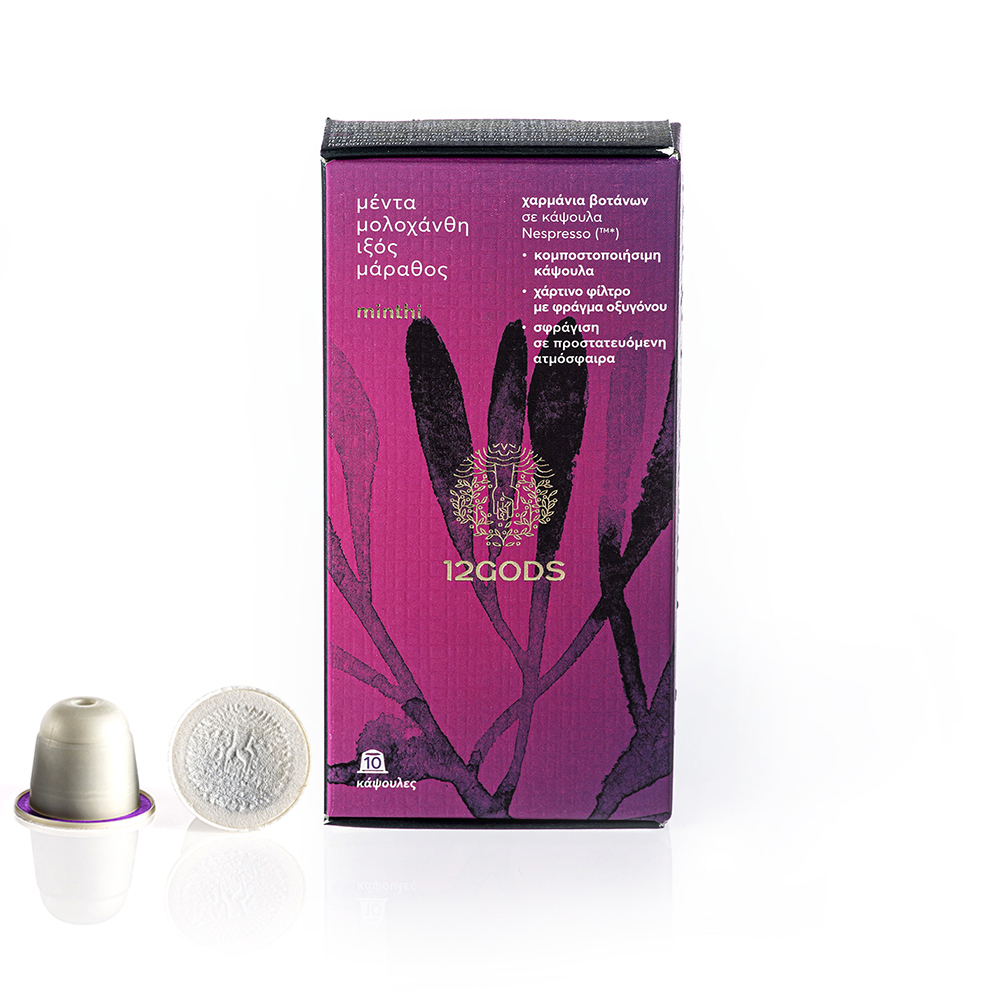 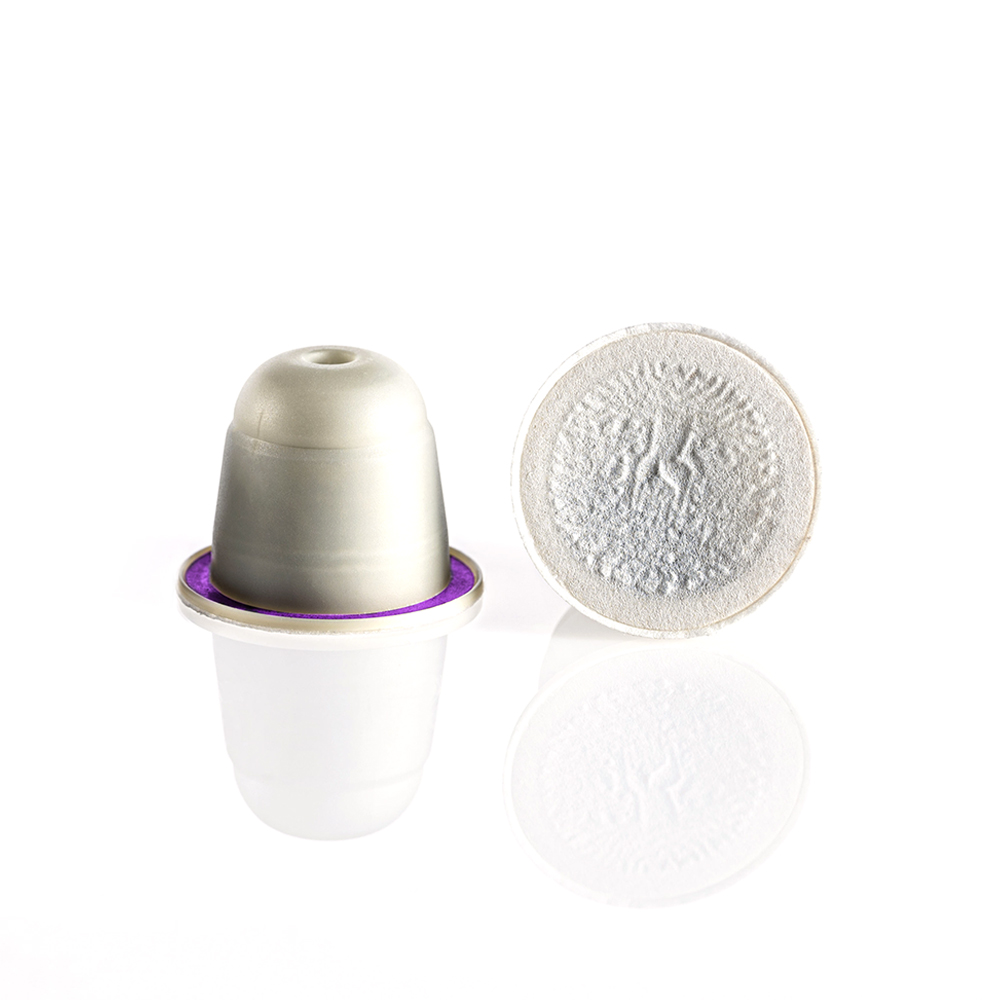 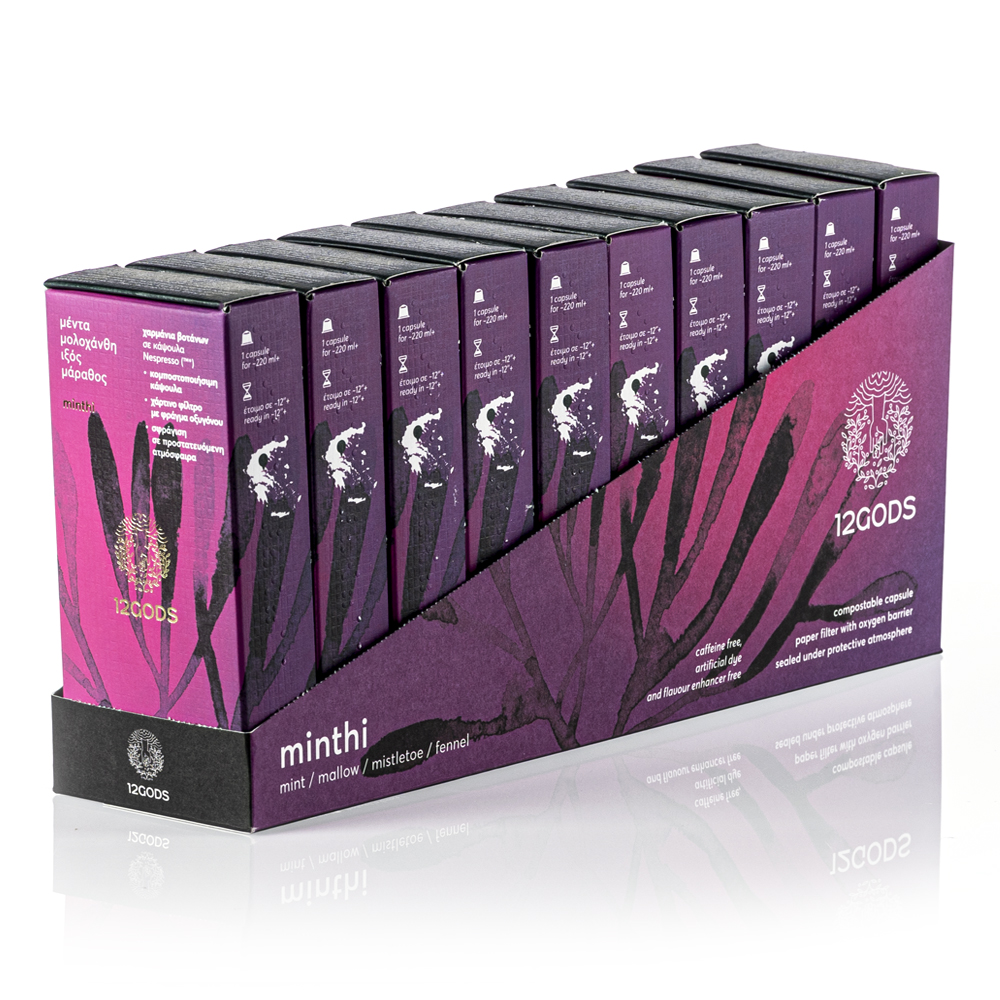 Pods per
package
1 pod
for ~220 ml+
Ready ~12''+
Refreshing and sweet, a herbal blend based on mint, which contributes to the normal function of the intestinal tract. The tall mallow facilitates digestion and supports the gastrointestinal health, while the fennel helps with flatulence and belly spasms.

The myth
THE MYTH OF MINTHI
The beautiful river nymph Minthi, was wondering around the slopes of west Peloponnese Mountains when she was unfortunate enough to fall in love with Pluto, the ruler of the underworld and also boasted that she was more charming than his wife, Persephone. The betrayed partner asked her mother, Demeter, the goddess of Agriculture to punish the disrespectful nymph and transformed her into a garden plant. Pluto, unable to bring her back to life, gave her an ethereal aroma and ever since, the herb that is growing in the homonymous mountain, has become one of the most famous aromatic plants in the world.
Legends & Herbs
(mentha piperita, visci albi herba conc., malva sylvestris L., foeniculum vulgare)
MINT MISTLETOE MALLOW FENNEL

There are references to ancient texts from the time of Galen and Hippocrates, during which they used mint against indigestion, nervous disorders, dizziness, insomnia, gastritis, cough, cold, sore throat and spasms. Pliny argued that mint rejuvenated the spirit and recommended its presence in patients' wards to facilitate their recovery. Dioskourides considered it warming and, consequently, aphrodisiac. The Greeks and Romans used to add mint to milk to preserve it and offered the herb after a meal as a digestive.

The most important philosophers of ancient Greece, from Aristotle to Theophrastus, but also Hippocrates dealt with the healing properties of mistletoe. From the time of Dioscorides, mistletoe was used as a medicine, and Hippocrates and Pliny used it against vertigo and epilepsy. In Anglo-Saxon, mistletoe was worshiped by the Celtic and Gaul Druids as a sacred plant and was used to make medicines and great magic potions. They revered mistletoe as sacred and cut it with a golden scythe.

Mallow is a well-known plant of antiquity. Hesiod first mentions it in the 7th century BC, while we find references to it and to Pythagoras: Porphyrius Phil., Vita Pythagorae Section 34, line 10. Plato the Athenian writes in the work Deipnosofistai that it is considered arterial abrasive probably because it was used as a preventive medicine against atherosclerosis. The Latin word malva comes from the Greek word soft, a name that gained thanks to its emollient action. Cicero and Horace tell us many of its soothing properties. Pliny said that if we eat a handful of mallow a day we will not get any disease. It was especially beloved by the Pythagoreans and, because its flowers are always facing the sky, it was considered a sacred herb. Diphilos Sifnios wrote that it helps in cases of irritation of the kidneys and the bladder.

Fennel was known in ancient Greece, China, Egypt and India. According to Greek mythology, the knowledge that came from the gods of Olympus, reached people inside a fennel bulb that contained a burning coal. It refers to the plates of Linear B, the oldest writing of the Greek language (1450-1100 BC). At that time, it was used as an offering to the deities. The ancient Greeks used it widely for its healing properties. During the 3rd century BC, Hippocrates proposed this herb as a sedative for stomach aches and colic in infants. Four hundred years later, Dioscorides claimed that it reduced appetite and increased milk production in breastfeeding women. The Roman Pliny suggested fennel in ten different prescriptions, believing that it could cure various ailments, and mentions twenty-two medicinal properties of the plant.