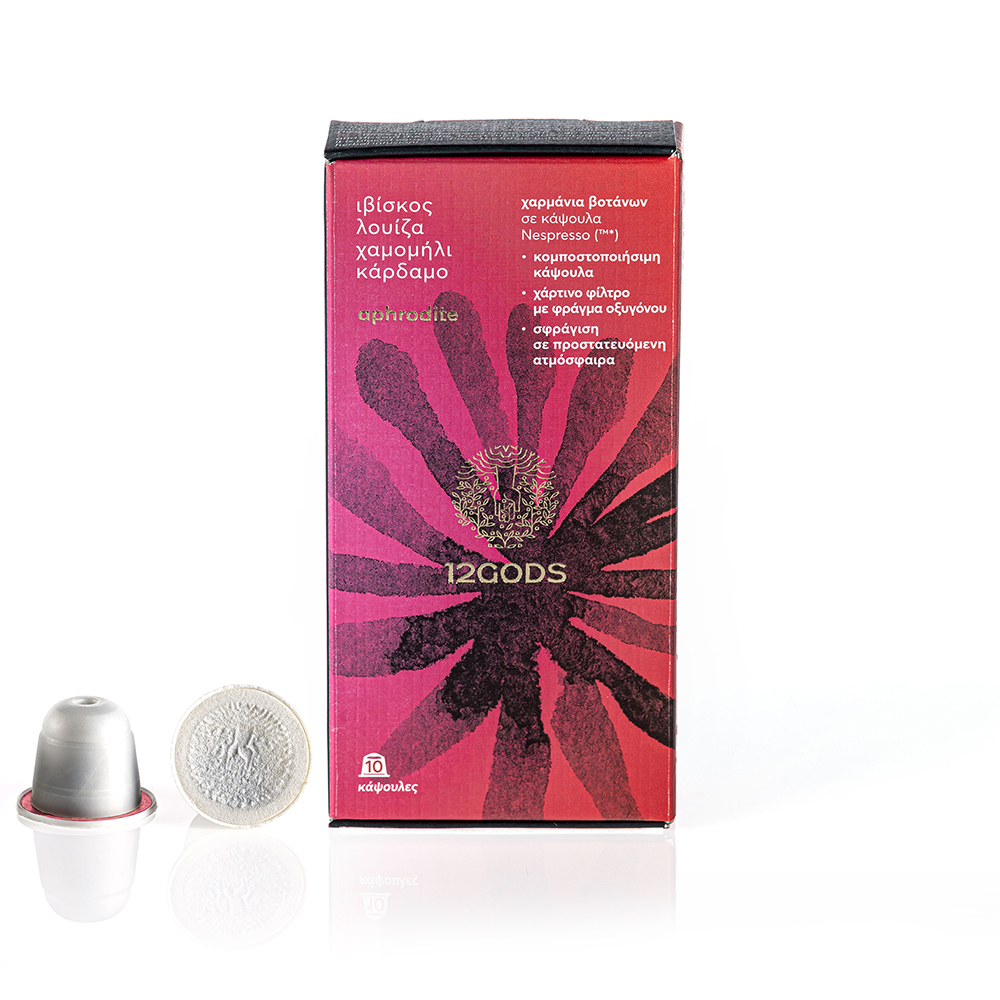 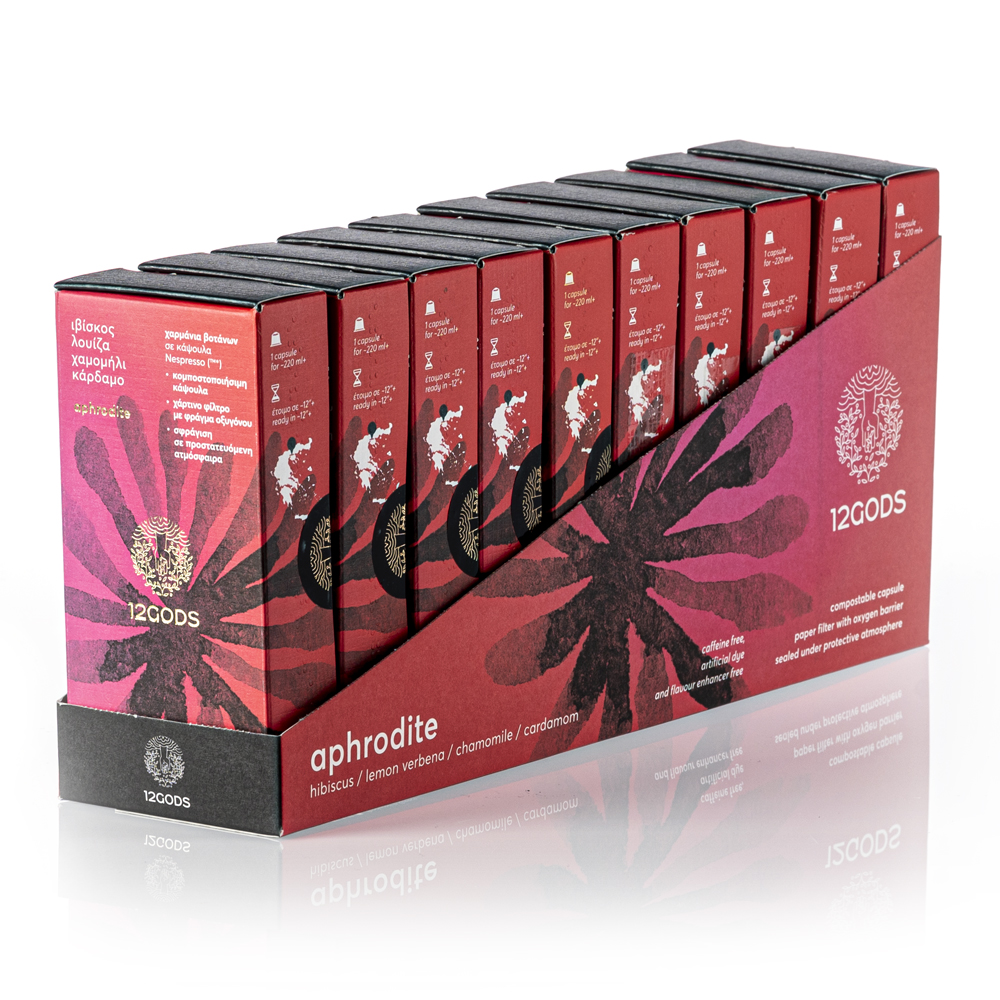 Pods per
package
1 pod
for ~220 ml+
Ready ~12''+
A blend with sour and slightly bitter taste, from Greek and oriental herbs. Hibiscus, the main ingredient, has a stimulating and tonic effect and properties that contribute to the resistance against mental and physical fatigue and is also used to enhance the renal elimination of water. Lemon verbena has a diuretic effect. Chamomile supports and contributes to the natural defences of the body and promotes the reduction in body weight, while the anti-inflammatory and antimicrobial effects of cardamum, increase immunity.

The myth
A WORKSHIP SYMBOL OF THE ISLE
It is said that the island of Rhodes owes its name to the rose red hibiscus, the shrub with the very beautiful and impressive red, large flowers. According to the legend, this flower was offered by Helios to his wife Rodis when they got married and it has given the name to the sunny island where the center of Sun's worship was located, as well as the mother of Rhodes, the goddess Aphrodite. In fact, the Olympic winner Diagoras persuaded its inhabitants to create a new symbol after the independence of the island, which came under the protection of god Helios as his worship was common throughout Rhodes. And so, on the coins of the time appears on the one hand the head of Helios and on the other the image of hibiscus. The custom has prevailed that the flower depicted on coins, seals and paths of pebbles is called rhodon, probably partly to be associated with the goddess Aphrodite, but referring mainly to the native hibiscus that loves sunny places.
Legends & Herbs
(hibiscus sabdariffa, matricaria chamomilla, aloysia citrodora, elettaria cardamomum)
HIBISCUS CHAMOMILE LEMON VERBENA CARDAMUM

The name hibiscus was originally given to the Althea plant by the important Greek physician and botanist of the 1st century AD, Dioscouridis. According to the Rhodian myth, this flower was offered by Helios to his wife Rodis when they got married and the island where the center of worship of the Sun was located was also named, as well as the mother of Rhodes, the goddess Aphrodite. China and India are competing for the origin of hibiscus. It's so beneficial that the wandering merchants of antiquity took him to the four corners of the globe, creating numerous varieties. Ancient Egypt and China held hibiscus in high esteem for thousands of years, using it for nutritional, medical and cosmetic purposes.

In India, hibiscus is a traditional medicinal plant used in Ayurveda. Research there has proven its antihypertensive and antioxidant activity. In Europe, the Flemish M. de L’Obel studied the plant in 1576.

The word chamomile comes from the ancient "chamaimilon" (hamai + apple). According to Galen, the ancient Egyptians used it as an antipyretic and, above all, against intermittent fevers. Ariston, a physician before Hippocrates, as reported by Galen, prepared a medicine with chamomile that he called "colic" and recommended it for "all pains". Hippocrates used it as an emmenagogue, against hysteria and leukorrhea. Dioskourides and, later, Pavlos Aiginitis recommended it as an antipyretic, diluent, painkiller and emmenagogue. Aspasia (it is not clear whether she was the wife of Pericles or not), as Aetios reports, used the infusion of chamomile in pregnant women because it reduced pain, during and after childbirth. The most famous variety of chamomile that grows and thrives in the Mediterranean and especially in the Peloponnese, Pylos, is Chamomilla recutita. Despite being widely used, researchers are constantly discovering new information about the active substances and properties it contains, to help make various preparations for pharmaceutical and cosmetic use.

Originally from Latin America (Argentina, Chile, Peru and Uruguay). Archaeological evidence suggests that it has been used since ancient times as an ingredient in South American cuisine and folk medicine. It is believed that the Incas (c. 1200–1572) were the first to discover the medical benefits of this herb that has antioxidant, anxiolytic and anti-inflammatory effects. The leafy stems of louiza were boiled for making tea. In South American folk medicine, it has a long history as a reliable herb for reducing fevers and treating a variety of digestive disorders such as constipation, diarrhea and flatulence. It was transported to Europe in the 17th AD. century by Spanish and Portuguese explorers and cultivated for the production of essential oil. The plant was named after Maria Luisa Teresa, princess of Parma (1748 - 1819), and later queen, wife of King Charles IV of Spain, who promoted its cultivation in the Royal Garden of Madrid and used its oil. as a perfume.

Cardamom is called the "queen of spices". A real queen, Cleopatra of Egypt, was so fascinated by its scent that it is said that she burned its seeds all over the palace waiting for Marco Antonio! Its strengthening, healing and aphrodisiac properties have been known since ancient times. The roots of cardamom (dry spice) are found in India. In its "homeland", cardamom grew wild in the forests of southern India and, until 200 years ago, supplied the spice to the whole world.

Difference between cardamom and watercress in Greece

The Greek name of the plant, which has come down to us since antiquity, probably comes from the Sanskrit word kardamah, "described a completely unknown plant". These are called "cardamom" in Latin languages. Cardamom, however, does not belong to the Greek flora. The fresh local grass, which we sometimes find on some stalls of popular markets, is called "cardamom" but has nothing to do with the dry spice of the East. It is the "watercress", a greenery that grows, as its name implies, near water, in lakes, rivers or streams and thrives in central and northern Europe.